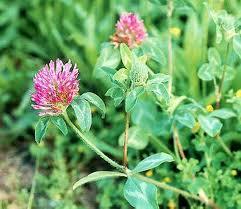 Description:
Red clover originated in southeast Europe and was introduced into America during the 17th century. It was used in Chinese traditional medicine and western folk medicine for similar purposes. It has been traditionally used as an antispasmodic, an expectorant, and a sedative for asthma, bronchitis and respiratory spasms. It is also used as blood purifier.

Red clover contains high amounts of isoflavones, such as daidzin, daidzein, genistin, and genistein, which has estrogenic properties. Double-blind studies found that menopausal women had improved health by using it, and it is also used as an antispasmodic, an expectorant, a sedative and a tonic. Red Clover has also shown anticancer activity.

ANS Botanics Limited is part of World Speed Group, expert in the development, marketing and sales of reliable raw materials for the pharmaceutical, personal care and nutritional health industries. Our range of raw materials is from botanicals to amino acids and other nutritional ingredients.

By a close co-operation with universities and research institutions, we are committed to provide innovative and high quality ingredients for nutritional market and bringing real value to our customers.

Thank you! Your message has been sent to the following suppliers.